What is Inheritance Tax?

Do I have a tax free allowance?

Yes each individual currently has a tax-free band, commonly called the nil rate band, of £325,000, this is deducted from the value of the estate and IHT is charged on the balance at 40%

What is the transferable nil rate band?

It is quite common for husband and wives to draw up a Will leaving everything to each other. On the first death no matter whatever the value of the estate no IHT would be payable as there is no tax between a husband and wife (“the spouse exemption”).

In those circumstances the nil rate band on the first death was wasted because the estate was being left to someone who did not have to pay IHT.

How does it work?

What is transferred is the unused percentage of the first to die’s nil rate band.

As Mr Adam used none of his nil rate band then 100% is transferable but at the level at the time of Mrs Adam’s death so her estate will receive a nil rate band of £650,000.

What do you need in order to make the claim to transfer the nil rate band?

You will need to produce

I do not have any of the above documents – can you help?

SERVICES AT A GLANCE

Pop in for a FREE Bennett Welch Brochure 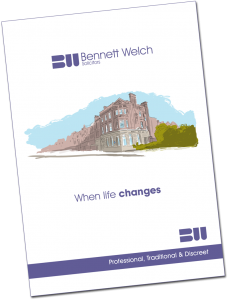